Its no surprise that some of the biggest gaming hits on the market are being backed up by ‘sister’ titles or related games. Much like King who added Candy Crush Saga Soda to its portfolio, Rovio has brought out Angry Birds Stella, targeting a more female market.

So far the response for the game has been great and Rovio seem rather satisfied with the uptake.

These results were proven within the first month after Angry Brids Stella Pop! had more than five million downloads. 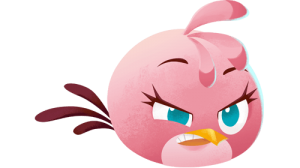 Furthermore, the total amount of downloads to date for the hit game is now over 30 million.

Across Youtube and Rovio’s Toon.tv channel, there have been more than a staggering 160 million views on assorted Stella videos.

Heini Kaihu, Rovios head of studio said “We are delighted to see it has a strong following of female millennials globally and is resonating especially in the US”.

This is not the end for Rovio, who are also planning to release Angry Birds 2 in July this year. This was announced recently on an official blog.

We will no doubt continue to see the success of the Angry Birds series and see a lot of excited loyal users get stuck into their new releases!