The puzzle game Best Fiends, which was launched by the Finnish developer Seriously in 2014 has achieved its largest revenue month to date. It has been reported by Seriously that in December the game produced over $3 million in revenue, bringing its total gross revenue $25 million.

It can be said that the part of the apps success was due to the Against Slime 2 charity campaign. The campaign included over 20 YouTube starts as well as The Ellen DeGeneres show – to be a part of a competition using the game. 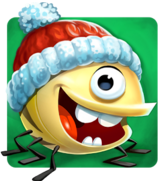 The campaign proved to be a huge success raising over $250 000 for charity and brought the total amount donated to $350 000.

The game saw over 2.6 million downloads due to the campaign, with the total downloads reaching 25 million. The daily active player count for the game in now at a staggering count of 2.1 million.

For more interesting statistics on the hit game see the infographic posted by Seriously.

Best Fiends is available for a free download from the iTunes App Store and Google Play.