The app offers four different goal-based programs which include Daily Dose, Get Lean, Get Moving and Get Strong. It also offers users Freestyle sessions such as 7 Minute Workout and 10 Minute Abs, amongst others.

The FitStar Personal Trainer app also allows users to track time spent exercising, approximate calories burned and completed sessions. It also rewards users with badges once various achievements have been met. Like other popular apps, users can share their results and badges with others via social media. 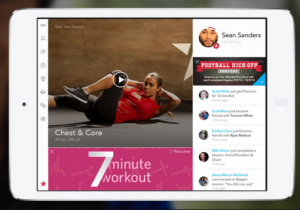 The co-founder of FitStar, Dave Grijalva said in a recent statement “ We designed FitStar Personal Trainer to inspire people to live healthier lives. FitStar for Android has been a top priority for us for some time—it is actually the number one request we get from our users.”

In March 2015, FitStar was acquired by Fitbit and then began to integrate with Fitbit’s platform.  On a weekly basis users are provided with two customised sessions and a selection of Freestyle sessions for free. There is also unlimited access available to the platform at $7.99 per month and $39.99 yearly.

FitStar Personal Trainer is now available for a free download from Google Play in Canada and the US.