Get Hungry with SMOSH’s Food Battle: The Game

Roadhouse Interactive has teamed up with one of the biggest YouTube Channels of the moment, SMOSH, to bring excited fans Food Battle: The Game – the latest in mobile action-adventure titles. This hot new title sees players launching themselves into an action-packed world of food battles, as they equip themselves with their trusty celery sword to fight off mutant donuts! This level based game provides players with the opportunity to advance their skills and their equipment as they successfully complete each mission. While you may start with the simple celery sword, you can eventually create an abundance food based weaponry for the battlefield. 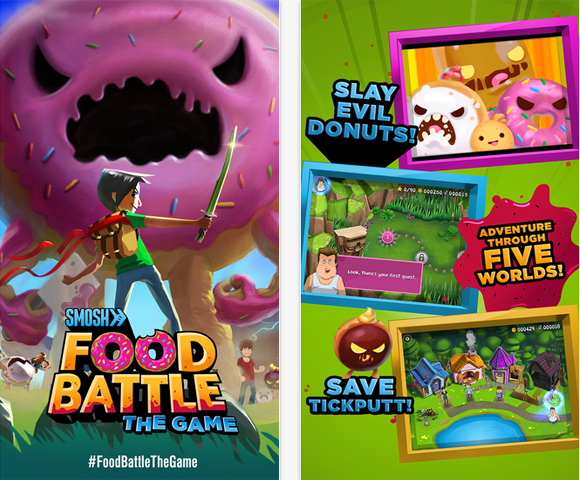 Food Battle: The Game was partially funded by fans, during an IndieGoGo campaign by SMOSH, while the remaining funds were contributed by DEFY Media, a parent company of the developer. Clever monetisation strategies have been implemented throughout the game, particularly one that allows players to instantly revive the hero of the game without losing their progress. With Food Battle: The Game available to both iOS and Android users, we are sure to see some dosh being spent on this little indie wonder.

“We are beyond excited for Food Battle: The Game and [to] see our creative vision come to life,” said Anthony Padilla and Ian Hecox, co-founders of SMOSH. “It has been a lifelong dream to create a SMOSH-inspired game and it has been an amazing experience to be part of the development process. Words can’t express just how excited we are for SMOSH fans to get their hands on the game and save Tickputt from mutant donuts!”

It’s not just the creators that are excited about this new step for SMOSH, with fans around the world already ranking Food Battle: The Game with a 4.5+ star rating in both app stores.