Back in 2010, Doodle Jump overtook the app stores, bringing to life one of the most acclaimed mobile games of our generation. While it was making waves after its initial release and still claims to be the third bestselling paid app of all time, Doodle Jump has fallen off the radar for most gamers. While the concept and the gameplay was well designed, developer Lima Sky failed to keep up with the ever changing world of mobile gaming and Doodle Jump inevitably became labelled as a game that represented what smartphones once were. Times are changing for this classic, however, as Lima Sky announces a collaboration with Warner Bros. to bring us Doodle Jump DC Super Heroes – the new and improved, free to play version of the original. 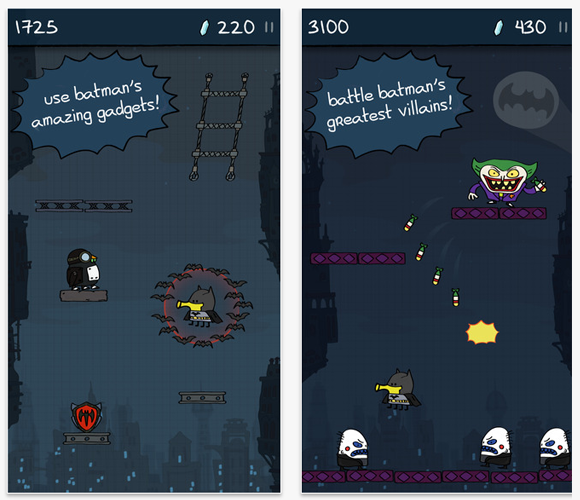 In a recent interview, Igor Pusenjak, co-founder of Lima Sky, said “We at Lima Sky are thrilled to bring Doodle Jump into the amazing worlds of DC Comics Super Heroes. We’ve been lifelong fans of the Batman universe and brand.”

Doodle Jump DC Super Heroes is currently only available for iOS users, as players team up with Batman to face off against Gotham’s most infamous villains, including The Penguin, Mr. Freeze, The Joker, and The Riddler. While players can only battle with Batman at this present time, there is already talk of big updates in the future, including a release of the epic game onto Android devices and the introduction of other favourite DC Super Heroes, such as Superman and Wonder Woman, along with their nemeses.