After the rave reviews Magician Casino is receiving in the iTunes App Store, it was only a matter of time until Ruby Seven Studios made the smart marketing move of launching the hit casino style game on Android. Since its release into the Google Play Store just one short week ago, Magician Casino already has a 4.5 star rating, easily matching the success achieved on iOS platforms. While the app stores often seem as though they’re overflowing with casino style games, what sets Magician Casino apart from the rest is that it is based on one of the most popular real-world casino slot machine games. 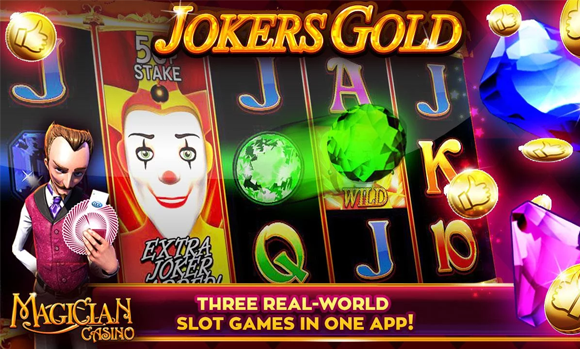 Unlike many other apps of a similar style, players have access to three slot machines within Magician Casino, a luxury that is very easy to get used to. Another bonus for loyal players is that there is ample room for more machines in the future, so it looks like Magician Casino is set to expand as its popularity does. As with most slots games in the app stores, Ruby Seven Studios has done a marvelous job at implementing a variety of monetisation strategies. Players begin the game with a standard amount of coins, with the goal of winning more with each spin. As an incentive to continue playing, users are also rewarded with points for performing in-game actions, which ultimately allows them to increase their chance of earning more coins. For instance, reward points are given for simply logging into a Facebook account and these points can then be used to gain 5% more coins with each win.

While I’m not usually a fan of casino style games, the authenticity of this new app really shines through, pushing it high above the standard we usually see in the app stores. If you enjoy the thrill of spinning the slots, I would definitely recommend checking out the fun times of Magician Casino on Android.