Recently launched by Shoto is its latest version, Album Match targeted to iOS devices. The app aims to allow users the ability to share photos with friends, and combines both the users and the friend’s photos into albums. The latest version, being a 5.0 update includes an ‘overhauled design’ for the app.  Additionally, it introduces Album Match which is a new feature that points out photos that each user may wish to share.

Album Match essentially identifies which friends were with a user when pictures had been taken at a certain location, then creates an ‘album match’ to group these photos into an individual album. After one of these matches have been identified, the user can then request access via their friends. Once the images have been approved by the friend, the user then has access to the folder. 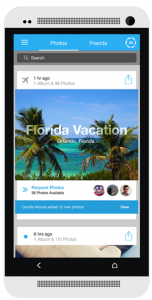 The app also includes an ‘album completeness’ feature that indicates whether a particular album could still contain more images from friends. Furthermore, the new version of the app includes a redesigned Library. Users are able to browse their Library to discover content. Lastly, displayed on the photos are icons that indicate whether the photos are public, private or shared.

Sachin Dev Duggal, the CEO of Shoto said in a recent statement to Social Times “ Shoto 5 is our big push in truly letting you get the photos you didn’t take. Whilst others sell you on this fear of missing out, you always end up getting a sharing app that doesn’t really get you the photos from friends. Our Album Match technology precisely tells you who has photos and let’s you ask for them by a single tap. All the photos pool into a single album.”

Shoto is available for a free download from the iTunes App Store.