The latest installment in the Star Wars franchise has hit mobile devices, as DeNA, Disney and Lucasfilm come together to bring us Star Wars: Galactic Defense. After achieving great success with Star Wars: Commander, released just a few short months ago, it only makes sense that Disney would continue this wave of goodness by announcing another launch for mobile. The newest addition to the Star Wars family sees players battling it out in an epic tower defense style game, once again choosing to stand along the “dark” or “light side”. 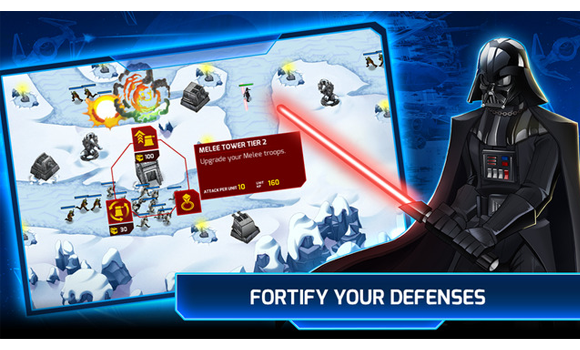 As you would expect with any app produced by three of the biggest names in the industry, the graphics are sharp and the artwork is impressive. One aspect of the game that is receiving criticism from both iOS and Android users is the implementation of a necessary Facebook login. If you want to save your progress, you must first sign in with a Facebook account, which can be a tad annoying. While there are a few things that need tweaking in the game, overall it provides a great source of entertainment and has huge potential to be a big hit on mobile.

“Star Wars: Galactic Defense adds its own flare to the traditional tower defense genre and brings the excitement that was once limited to a galaxy far, far away, right to your fingertips,“ said Barry Dorf, vice president of partnerships and alliances at DeNA, in a statement. “The game packs beloved characters, iconic locations, tactical gameplay, and heart-pounding battles into one exciting mobile experience.”

While you eagerly await the next installment of the blockbuster franchise on the big screen, get your Star Wars fix on the little screen with the latest in mobile game goodness.