Unity has, in many ways, changed the way we develop and produce games for the better. Since its launch into the mobile gaming industry just four short years ago, Unity has announced a prediction of more than 1 million users by the closing days of 2014. With more than 15, 000 Unity apps and content packages found across both the iOS and Android app stores, it’s evident to see that the popularity of the Unity Asset Store simply continues to grow. 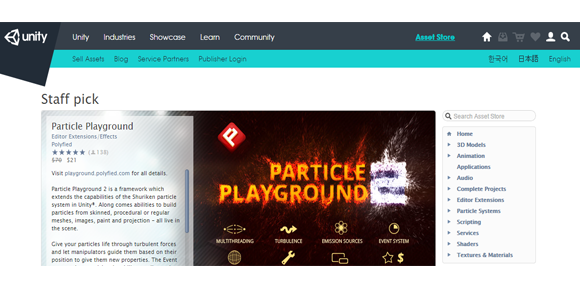 “We are very proud of what it’s turned into just four years after launch,” said founder David Helgason.  “It’s saving developers time and resources, providing access to assets and tools that would otherwise have been out of reach, and has created incredible new streams of revenue for many.”

While drastically cutting development time with innovative technology is an accomplishment in itself, it seems as though Unity is also providing opportunities for teams to their tools into businesses.

“The Asset Store and community have made the continued development of Shader Forge possible to the point where I’ve now been working on it full time for about a year,” said Joachim Holmér, creator of Shader Forge. “It’s absolutely amazing to see what people create with a tool of your own making and watch how an actively helpful community forms around it.”

Helgason envisioned that the Unity Asset Store would be a “democratic marketplace that would give developers, especially indies, a way to acquire high quality assets and technology cheaply while also providing a way to make some extra money on the side”. It appears as though a big congratulations is in order for the team at Unity, because your vision has turned into reality – and what better way to celebrate than by reaching a massive 1 million users in 2014!