Gaming giant Ubisoft has released its financial report for FY16 and it shows some pretty staggering results. In just under six days, their new hit title Hungry Shark World was downloaded more than 10 million times.

The newest edition to the Hungry Shark family of games is in the stores under the arcade category. Players are challenged to unlock bigger and bigger sharks as they chew their way through various characters (sea creatures) in the game. 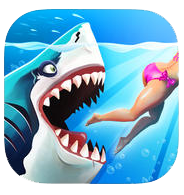 To Ubisoft, another key measurement of success for the game would be its top grossing results. In the iTunes App Store for iPhones it reached its top position at #34 and is currently sitting at position #50.

It is a general conception that single player games are lower when it comes to long term retention, so let see how the game maintains its position – its surely looking promising!

An interesting fact is that according to Ubisoft’s FY16 sales records, handheld and mobile gaming amounts to around $95 million.

Hungry Shark World is available for a free download from the iTunes App Store and Google Play.