If you are tired of waiting around for your friends text responses, wait no more.  There is now an Android friendly app that will take your keyboard to the next level.  It’s called “Ginger” and is the ultimate application to kill your boredom while you wait for your messaging responses, allowing you to play a game or read the news without exiting the messaging app.

The concept for the app was initiated following a recent study which showed that most of the time spent on the messaging app is in fact idle time. Ginger provides the user with the option of three time killing games such as Snake, The Pong-like Squash or the 2048 numbered tile game. 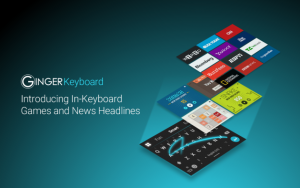 A recent update for Ginger on Google play which became available on March 31st now enables the game or list of news to become available on your keyboard with a tap of your finger. The idea behind the feature is that it occupies your attention until you’re ready to continue with your text messaging conversation without having to exit the app.

If you’re not into any of the games, there is also the option to search the news with topics ranging from sports to technology.

Ginger has also offered a “Smart Bar” feature that allows you to use third party apps to create actions such as typing a note or noting a calendar event without exiting the keyboard.

The good news for Apple users is that Ginger claims that the app will eventually be available on iOS versions of the keyboards. Chief Marketing Officer of Ginger, Oded Lilos said that “We are waiting for the general third-party keyboard support in iOS to mature”.

The app is now available on the app store, but remember not to get too distracted and forget to text that response to your friends and families!